In the past few months, I've been experimenting with digital art. The process involves creating a rough sketch, cleaning it up into lineart, and then finally coloring and shading to create a final product.

Out of these three steps, adding color is by far the most time consuming. So let's get the computer to do it for us! In this post I'll go over the methods behind deepcolor: a network that automatically finishes a given lineart image.

Note: this post will assume a basic understanding of convolutional neural networks. For more on how they work, check this post or this chapter of the deeplearning book.

As a teaser, try the deepcolor demo here!

First, let's take a look at what other people had already made to get a sense of where to start. Convolutional Sketch Inversion uses deep convolutional networks to directly map from input sketch images to a photorealistic face image. Colorful Image Colorization uses the same methods to colorize grayscale photographs.

This seems like the most straightforward approach. A simple convolutional network could potentially solve the entire problem, so let's start there.

Unfortunately, recreating color from only lines is a hard task. The network completely failed in inserting color at all.

Not really what we're looking for, although there is a nice sketch-like effect.

There's a few things we can do from here to make our outputs better.

L2 loss is known to create blurry image generations. Instead, we can use an adversarial loss, allowing the network to learn its own loss function. Essentially, we'll transform our model into a generative adversarial network, except rather than creating images from random noise, we'll create them based on the line art.

Additionally, we'll use residual connections between each convolutional layer. This is a fancy way of saying that during generation, convolutional layers will operate not only on the previous layer, but also on same-dimension layers from before.

It's hard to describe in words, so a visual may help clear things up.

Network without residual connections. Each convolutional layer (green square) has a stride of two, so the dimensions shrink in half after each operation. Transpose convolutions (sometimes referred to as deconvolutions) double the dimensions.

What residual connections do is allow the network to have a lengthy pathway for heavy processing (such as recognizing facial features), while still having references to the original input. In our case, the lineart itself is often present in the final drawings, so we want a way for this information to be passed through without going through every layer.

Check out this Torch post for more on residual connections.

I implemented the changes, and trained the network once more. How well did we do? 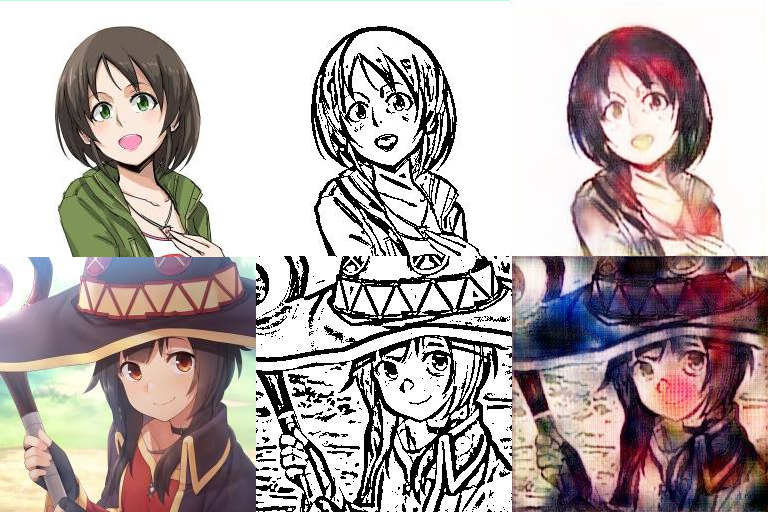 It's definitely an improvement! We've got actual color this time. At least for the top example, the network learned the color of skin. Of course, it colored in the hair and shirt incorrectly, since the network has no idea what the original colors were.

In the second example, we're left with a big mess. There are some hints of success (the hair and hat are black!), but mostly the colors are all over the place.

At this point, there's really not much to change in terms of the network. We have something that's kind of correct, and we can work with that.

What's causing the network to have such a mess of colors everywhere? It's the probably most confused when dealing with objects that could be any color, such as clothes.

Of course, if we give the network every single pixel color, it wouldn't have to do anything at all to recreate it. To combat this, we'll apply a large 100px radius blur, and pass that as our color hint.

The network now takes in both the blurred image, as well as the line art. Looking at the above image, we can see how helpful the color hints are. Without the color hint, the network would have no idea whether to make the background white, black, or some other color.

How well did it work? 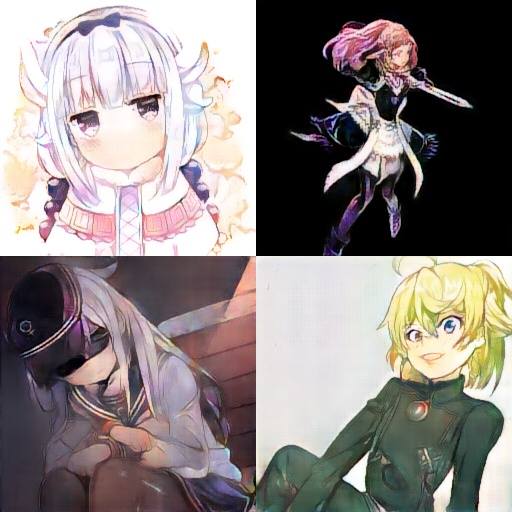 It's a big success! The generated images look natural, and match the originals closely.

Of course, this comes at a price. We're now dependent on the color hints to generate images. It's important to take a step back, and realize that our dataset is not actual linearts and sketches, but a simulated set created by processing the original image.

I decided to attempt and use my own (intentionally messy) coloring as a color hint, rather than the original image, and see what happened.

The results were unimpressive. At the areas where I missed colors, the network failed to color in the hair. Sure we've got incredibly accurate recreations, but using a bad color hint will still lead to a bad generation. If we need the original image in order to generate the original image, we really haven't solved anything.

To really drive the point home, here's what happens if we pass in no color at all. 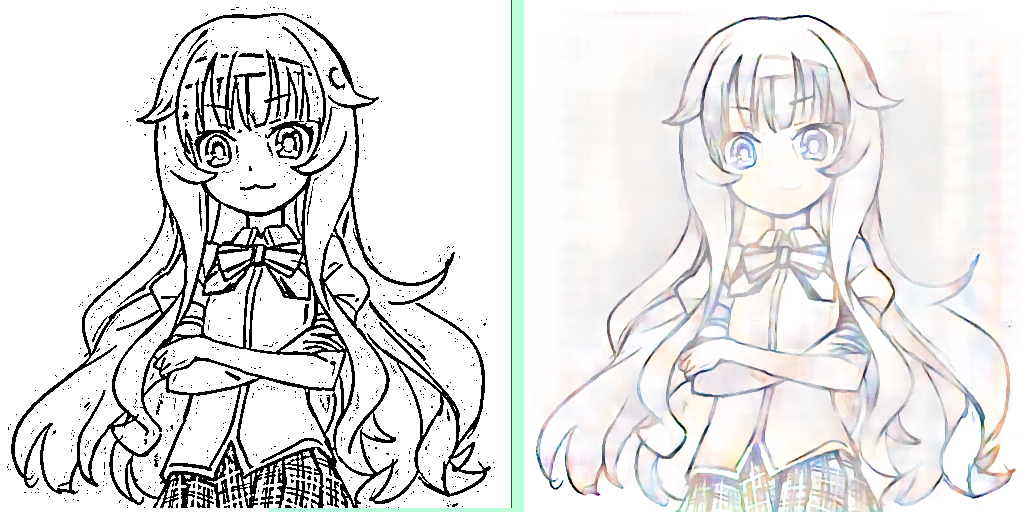 The network's not doing anything with the lineart. Almost all the details in the recreations came from the color hints.

It's at this point that we have to make a compromise. Clearly, the color hint is vital to generating good images, and performs well on simulated color hints. However, we can't realistically expect users to completely color in their lineart themselves and call that a "hint".

To remedy this, we need to reduce the network's dependence on the color hint. Most of the information in the final image should come from the line art, with the color hint as a secondary.

How should we go about doing this? Let's restrict the amount of information the color hint can contain. The blur was supposed to act as an information barrier, but apparently it isn't doing a good enough job.

Instead, we'll use a somewhat crude but straightforward method to make the color hints less useful. Take the original image, and randomly white out a 10x10 area of the image. Do this 30 times, then we will apply the same blur as before.

Noticable in the image above, the new form of color hint is missing lots of information. Now, the network is forced to guess what colors should go there, based only on the little color hints it's receiving.

I trained the model once again, using the new color hints.

This, time we've performed much better! Even though I missed many spots in the coloring, the network still realizes what I meant to do, and fills colors in accordingly. This makes sense: since we trained the network with holes in the color hints, it had to learn to account for them.

Note: When training, we randomly removed parts of the color hint, to force the network to learn better. When we're actually using the network, we want as much detail as possible, so we don't remove anything, Instead, we scale down every color intensity by 0.3 (expected value).

Now, let's take a look at what happens if we pass in no color at all. 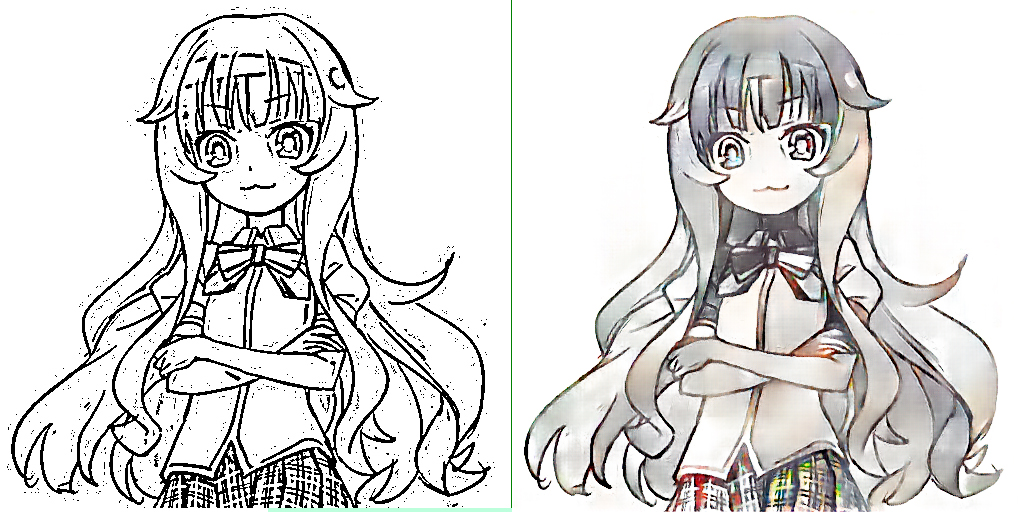 And with that, the model is complete! The online demo uses this exact setup.

All code for this project is available on my Github. The training images were all taken from Safebooru.

This project was inspired by PaintsChainer. I've been working on this idea slowly for a few months, but seeing someone get close to what I was envisioning motivated me to finish it up!

How can agents learn hierarchies that are useful across a wide range of tasks? At OpenAI, I set out…

What is the natural gradient, and how does it work?

A few months ago I attempted to understand the natural gradient, and wrote a post to help organize what…